Squarish Lavoisier A of Oceanus Procellarum 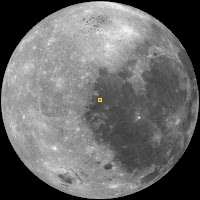 Why are most craters circular (even craters found on Earth)? By hurtling objects together at many miles per second in large laboratories, scientists have shown that only the most oblique impacts (less than 10° from the horizon) produce elliptical craters.

The kinetic energy of an impactor behaves much like the energy from a nuclear bomb. The energy is transferred to the target material by a shock wave, and shock waves produced by an impact, whether oblique or head-on, propagate hemispherically. This shape means that energy is being delivered equally in all directions; resulting in a hemispherical void and thus circular craters. However, conditions in nature do not always mirror the laboratory. In fact some craters are nearly square! A portion of the rim of Lavoisier A crater tells a story of the geology before impact. Lavoisier A is a squareish crater with a diameter of 28.5 km in the northwestern portion of Oceanus Procellarum.

Much of Lavoisier A's shape is thought to be due to preexisting joints or faults in the target rock. These discontinuities create zones of weakness, affecting how the shock wave travels through the material. We find square craters on other planetary bodies such as on the asteroid Eros and here on Earth. An example of a square crater that has been thoroughly studied is Meteor Crater in Arizona.

This crater formed on layers of sedimentary rocks that have orthogonal vertical joints running below where the crater formed. The joints disrupted the shock wave flow in certain directions, preventing the formation of a circular crater. Another indication of weaknesses within the target layers is the appearance of the northeastern portion of the crater rim. It appears as if a layer of rock has been peeled back.

Can you find the evidence of pre-impact fracturing (square boundaries) in the full resolution NAC, HERE?

This blog hasn't been active for months. What's going on?

I've learned so much about the moon here. I hope it continues.