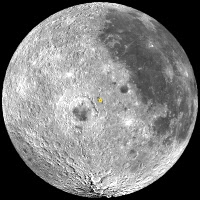 This exquisite crater formed when an impactor crashed into the mare pond called Lacus Autumni. Angular blocks, which erode over time and gradually disappear, littering the terrain both within the crater and outside of it.

Though the margins of the crater are crisp and distinct, it has a lumpy appearance that is probably due to the coherence of the target material.

The ejecta of the crater has a slightly higher reflectance relative to the mare in which it is found. High-reflectance ejecta can represent recently exposed material that has not been affected by space weathering processes, called maturity rays, or material that is compositionally distinct from its surroundings, called compositional rays. Due to its crisp appearance and the predominance of blocks, we interpret this as a young, fresh crater, so the rays are likely maturity rays.

Lacus Autumni (or "Autumn Lake"), along with Lacus Veris and Mare Orientale, is a mare pond located in the northeast portion of the Orientale Basin. It lies between the Orientale inner ring (Montes Rook) and outer ring (Montes Cordillera). When craters form in thin mare sometimes high-reflectance highlands material is excavated from depth, which makes it difficult to differentiate between maturity rays and compositional rays. To resolve this issue, we can look at the composition of the material that was excavated, looking specifically at both iron and titanium maps.

If the rays are indistinguishable from the mare in which the crater formed, then we can conclude that they are highly reflective because they are young and unweathered. If the rays are composed of highlands material, the rays are likely compositional rays.

If the crater excavated highlands material from beneath the mare, then we can estimate the thickness of the mare deposit and determine just how much lava was extruded onto the surface when the mare formed. In the case of compositional rays, the morphology of the crater, such as a crisp rim or peak, is an indicator of the age of the crater.

The crater rays in this LROC Featured Image are indistinguishable from the mare in which they are found, so these are indeed maturity rays.