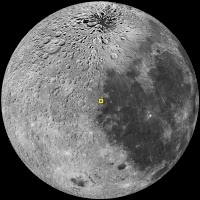 Lavoisier crater has many geologic forms that give insight into its history. On the floor are concentric craters, which exhibit an inner and outer rim; these strange craters are thought to have formed as a subsurface discontinuity, such as a strong rock layer below loose regolith, which interfered with the passage of the impact shock wave.

Fractures, which are caused by uplift of brittle material, are also abundant and point to subsurface magmatic intrusions or viscous relaxation as possible formation mechanisms.

Today's Featured Image, found on the western edge of the floor of Lavoisier crater, shows low reflectance material that appears to have flowed from the head of one of these fractures. These flow fronts have been identified by lunar scientists as being the remnants of pyroclastic deposits. The irregular depression is not just another fracture, but a source vent for the eruption that created these deposits!

The eruption (or eruptions) that threw these pyroclastic deposits out onto the surface are thought to be an energetic style of volcanic eruption called fire fountains. Eruptions like this are more chaotic due to the presence of volatile elements in the magma. Since magma source regions are hundreds of kilometers below the surface, pyroclastics are of interest to scientists because they provide information about the deep interior at the time of eruption. Understanding the distribution and composition of these deposits provide a path to deciphering the evolution of the interior conditions of the Moon through time. The Lavoisier pyroclastics and many other similar deposits are key sites for future robotic and human exploration.

Investigate the mantling of pyroclastics over the crater floor up close with the full resolution NAC mosaic, HERE.