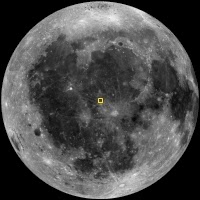 Montes Carpatus is a mountain range composed of multiple peaks and rises along the southern edge of Mare Imbrium.

The bases of several peaks were flooded and are now surrounded by the mare basalts that fill the Imbrium basin. The opening image highlights the northern slope of an unnamed mountain in the range. The mountain is about 14 km in diameter at its current base, and its height is about 1700 meters.

These low reflectance materials, which cover the broad top of this mountain, have over time cascaded down the northern slope. Similar low reflectance materials are distributed at the top of neighboring mountains of Montes Carpatus, but their origin is not clear. This region, including the Carpatus Mountains, was blanketed by ejecta from the impact that formed Copernicus crater. The ejecta thrown here from Copernicus may have contained pyroclastic materials, the dark volcanic products of explosive eruptions, or impact melt now exposed on the mountain slopes. Alternatively, dark pyroclastic materials were originally deposited atop these mountains.

New NAC and WAC images continue to present more detailed views of the Moon's surface, allowing us to read the complicated geologic history of the lunar mare.

Explore the dark materials flowing down the mountain in full NAC frame, HERE.