New views of Chang'e-3 from LRO 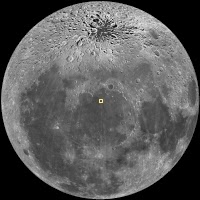 As the Sun gets higher above the horizon, topography appears subdued and reflectance differences become more apparent. In the case of the Chang'e 3 site, with the Sun higher in the sky one can now see Yutu's tracks (February image). In the opening image you can see Yutu about 30 meters south of the lander, then it moved to the northwest and parked 17 meters southwest of the lander. In the February image it is apparent that Yutu did not move appreciably from the January location.


Some Related Posts and LROC Featured Images:
Geologic Characteristics: Chang'e-3 exploration region
ESA on Yutu, as controllers wait for Feb. 9 sunrise
Chang'e 3 Lander and Rover From Above
Safe on the Surface of the Moon
Recent Impact
Coordinates of Robotic Spacecraft
Posted by Joel Raupe at 3:59 AM

Online Training
This year’s Technology online training classes for many students in the world look radically different from those in the past. Powered in part by the 21st Century Software Solutions—providing online trainings on all technologies by real time experts.
Online training is a precious and cost-effective method for continuous education and overall efficiency development that provides employees with well-rounded individuals and motivated employees dedicated to building the carrier.

Convenient - As employees struggle to balance the demands of work and home, Online Training allows them to learn from work, home and on the road. Relevant - Since course content includes the most current topics, Online Training ensures training is related to a person's career path. Instant - Delivery over the Internet enables Online Training to begin with just a few mouse clicks. Affordable - Cost savings is a key attraction as corporations save between 50-70% due to elimination of travel expenses according to Training journal. Fun - By providing a charming interactive environment with dynamic content, Online Training not only effectively keeps people up-to-date, but interested as well. Easy to Use - Open an Internet browser and employees are up and running quickly. ROI to the Max - Affordable online training can be up to 93% cheaper than instructor-led courses. Self Directed and suitable - Employees to learn at their own pace and maintain control of learning “where, when and how” with boundless access 24/7by 21st Century Software Solutions. contact@21cssindia.com
http://www.21cssindia.com

This course is designed for Deployment Consultants, Architects and Administrators, who
will be building, deploying and/or maintaining a SiteMinder infrastructure.