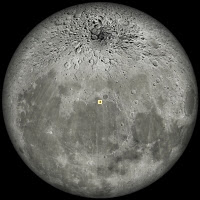 This beautiful mountain, called a kipuka, is located in northern Mare Imbrium on the nearside.

Kipukas are the high-standing remnants of a lava-flooded terrain and are quite common on the Moon. In this case, the kipukas are likely part of the inner ring of the Imbrium impact basin that was later flooded by mare basalts. The lobate scarp in the opening image formed due to contraction and the subsequent upward thrusting of the surface.

This scarp looks very familiar, a twin to the famous Lee-Lincoln scarp that the Apollo 17 astronauts explored in the Taurus Littrow Valley.

Another common feature in Mare Imbrium are wrinkle ridges like the one above.

Wrinkle ridges form when the surface undergoes compression due to sagging of the lithosphere below large mare deposits. Local tectonic conditions such as the thickness of the mare, direction of stress, and the strength of the basalt affect the final shape of a wrinkle ridge, yielding a variety of ribbon-like ridge forms.

Investigate this complex area for yourself, HERE.

Related Posts:
That's a Relief
Balcony Over Plato
Wrinkled, But How Old?
Wrinkle Ridge in Mare Crisium
Remnants of the Imbrium impact
Posted by Joel Raupe at 5:33 AM