Twin mare pit craters in the Lake of Death 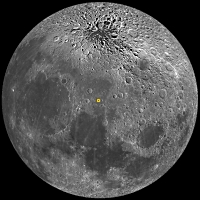 It was something of a sensation just a few years ago when Kaguya (SELENE-1) images unveiled a "pit crater," an honest to goodness opening into a sublunarean world.

Ant this new feature was found right in the middle of the long-observed and studied channel of the unofficially named "Sinuous Rille A," in the Marius Hills of Oceanus Procellarum. What a difference, many thought, high resolution photography would make of our knowledge of the lunar surface.

And they were not disappointed. Most of what we now know of the lunar surface is entirely a product of the 21st century, largely a pay off from "precursor" missions vital to the success of a now-scrubbed program ahead of a return to the surface of "extended human activity" later this decade.

Junichi Haruyama and his colleagues reported their findings in Geophysical Research Letters in 2009, having captured the Marius Hills Pit at resolutions as high as 6 meters per pixel using the Kaguya Terrain Camera and Multiband Imager, as discussed by LROC principle investigator Marc Robinson, March 1, 2010.

Not many months after the controlled impact of Kaguya the Lunar Reconnaissance Orbiter began its long and productive tour in lunar orbit.

Early in that still-ongoing mission the LROC team at Arizona State University released their own high-resolution NAC images of the Marius Hills Pit, and under a variety of lighting angles, while announcing the discovery of two additional, even larger and more distinctive "pits" in the western interior of Mare Ingenii and the well-preserved example near Sinas J, not far from the vent structures at the west terminus of Rupes Cauchy, in the middle of Mare Tranquillitatis.

These new images left little doubt that significant underground areas existed on the Moon, though how far these sublunarean areas stretched beyond their exposed "skylights," the true scope of the Moon's near-surface underground world, must remain a mystery for some time to come.


These features seemed to be rare and solitary. Rough treatment of the lunar surface, aeons of steady and sometimes heavy bombardment seemed to leave very few of these openings intact. Perhaps the same may be true of extended "lava tubes," and other tantalizing, hoped-for discoveries.

Planetary scientists and geologists have studied the interior walls of these structures. The LROC team has released a high volume of imagery of the Tranquillitatis pit crater, for example, and attempts have been made to map the history of lava inundations recorded in the exposed layers.

The unique Natural Bridge feature of King Y is a nearly unique example of the much more widespread family of collapse and channel remnants common to impact melts, both inside and outside relatively "recent" impacts, like the northeast quadrant of the interior of Copernicus, for example, and deep inside Messier A. To distinguish these from the Marius-Tranquillitatis-Ingenii family of openings, the latter are now referred to as mare pit craters.

Far from being as widespread as melt channels and collapse pit, the Mare Pit Craters seemed to be solitary, perhaps one to a plain, if any at all. As seems common to all deep space discoveries, however, of course there had to be an exception.

In the west central interior of the rugged Lacus Mortis plain are two near-quarter kilometer-wide pits, though both are either partially or completely filled in. They are intriguingly situated on opposite sides of a main channel north of its junction with a distinctive faulting in the Rimae Burg vicinity, northeast of the volcanoes highlighted in an LROC Featured Image (Volcanoes in the Lake of Death), August 11, 2010.

The interior walls of the northeastern twin, shown in the first two images above, retains the kind of layering seen in the Tranquillitatis and Ingenii pits, evidence of periodic lava flooding in the remote past. This bedrock under Lacus Mortis makes for a tough roof, but over what? Have any of these mare pit craters yet been found over the deeper basins?

The east-southeast wall of the northeast pit seems to have filled in, like a forgotten entrance to a pharaoh's tomb, though the south interior stays in hard shadow at this latitude. But the north wall offers up a shadow ring where the sun's angle should be well placed for illumination, hinting at an unseen and deeper interior perhaps.

Sadly, the southeastern twin, though apparently the "real deal," appears very degraded. Exterior regolith, heavily pounded by the steady bombardment of the micrometeorites gardening the upper three centimeters of the lunar surface every two million years, has spilled over filled the interior. Its south wall, in high latitude shadow, stays invisible in shadow, but with little visible component leading to an indication of any difference with the rest of its fine-grained interior fill.

Did these two examples of mare pit craters, perhaps the only such "twins" on the Moon, degrade more quickly because of a greater age than their more noted cousins at Tranquillitatis or Ingenii? Did the arrival of the impact that formed Burg cave them in? Is this area more prone to Moonquakes?

Hmmm, there's a nice ramp right down to the possible cave opening in the less degraded pit (at least at this resolution) a rover might be able to explore.

I't great that these things keep turning up. I know there are a few discovery class mission proposals for visits to a pit. How interesting might that potentially be?

This one is also quite far north. Ice trap?

I was curious about the possibility of an ice, better a volatile," trap also. An excellent point. Then again, depending on how broad the apparent "balcony" may be around the rim of the Tranquility Skylight (and considering the stream of neutral hydrogen incident nearer the equator, than might be a candidate as well.

ERRATA: The second image was incorrect, being only a less granular reproduction of the 1st image, though the label was correct. The proper field of view highlighting the northeastern skylight, from the cited high slew image (M1105701957LR), which includes both of the twins, has been uploaded. A regrettable error, now corrected.