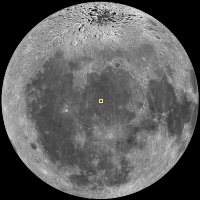 The lunar maria were once "seas" of highly fluid lava, and within their margins small islands and shorelines can be found. Today's featured image highlights a classic example of a partially flooded impact crater within Mare Imbrium. The western wall of the crater, a low point in the rim, was breached by the flowing lava, and the crater was filled nearly to its rim. What remains of the rim is known as a kipuka, the Hawaiian word describing an island of older land surrounded by younger lava flows.

The shoreline can be seen within the crater as a terrace-like ring just inside the crater rim, particularly on the eastern side. This terrace is akin to the high-water mark of a flood, and marks the high-lava point along the crater wall. As the lava cooled, it contracted and subsided to a somewhat lower level. Similar features are seen in areas like Bowditch, within Lacus Solitudinis.

The flooded crater in today's image is approximately 2.7 km in diameter, and was likely originally around 500 m deep. That gives a maximum lava thickness of a little less than 500 meters in this spot, though that does not require a single 500-meter thick flow. Lava likely pooled in the low of the crater floor from multiple individual flows, rather than one massive influx of lava. Layering exposed within sinuous rilles,  mare pits, and impact craters suggests individual lava flows were much thinner (on the order of 10 meters).

Note the small (250 meters in diameter) high reflectance crater nearly in the center of this flooded crater. An astronaut could descend its interior and inspect a cross-section of about the top 25 meters of the basalts and determine the thickness and frequency of the lava flows that filled the host crater. The rim of this impact crater is the only kipuka preserved in the area, and is the last local remnant of the surface before it was drowned in the lavas of Mare Imbrium several billion years ago.

Related LROC Featured Images:
The Swirls of Mare Ingenii
Remnants of the Imbrium Impact
Posted by Joel Raupe at 8:35 PM