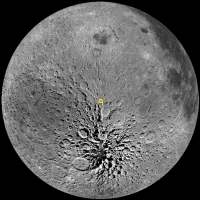 However, it was not the Mendel-Rydberg impact that was responsible for the ups and downs in the hummocky deposits seen in today's Featured Image, but the Orientale impact event, hundreds of kilometers away to the north.

Ejecta from impact basins is both erosional, gouging out long valleys and leaving strings of large secondary craters (along the arrows in the image below), and depositional, blanketing even distant terrain with material excavated from the impact site. Basin ejecta plays such a large role shaping the lunar surface that these ups and downs are often referred to as "basin sculpture," and the ejecta from Orientale certainly sculpted the terrain in today's image. 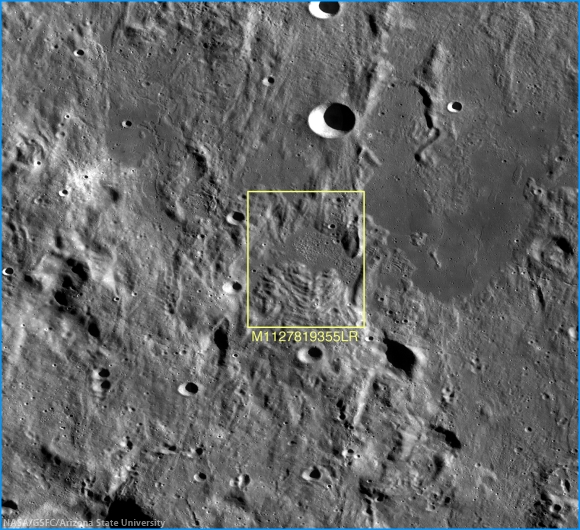 The hummocky deposits that cover low-lying areas in the top image, and the image below, are likely ejecta from the Orientale basin. These low-lying regions may have once been exposures of smooth mare basalt, some of which is still exposed on the surface in nearby regions, but are now hidden under a blanket of debris from Orientale. Buried volcanic deposits such as these are known as "cryptomare" and tracking down the locations of these ancient sites of volcanic activity is key for understanding the extent of early volcanism on the Moon.

You may also note that the hills in the southern portion (right side) of the image above have a lumpy texture, also visible in the WAC context image. This is also likely due to Orientale's influence - the result of a massive ground hugging flow of ejecta that piled up on the sloped terrain. This oblique view of the region gives a great perspective on its complex history that would have been compelling enough with just the ancient Mendel-Rydberg basin and early lunar volcanism, but the spectacular basin ejecta flows captured here are just icing on the cake (so to speak).