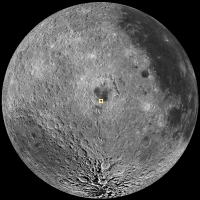 With an estimated age of around 3.8 billion years, and a diameter of over 900 km, the Orientale basin is the youngest of the large lunar impact basins.

Its interior is relatively well preserved and its floor has not been completely buried under mare basalts, making it one of the most studied basins on the lunar surface in the hopes of unraveling the mechanics of multi-ring basin formation and the relationships of volcanic infilling to large basins.

Today's featured image highlights some of the more bizarre and complex features inside the southwestern portion of the basin, where primary features related to the basin itself meet the later-forming mare basalts in the basin floor.


The striking linear features seen in the top image are portions of a series of cracks that are near-radial to the basin and are unlike typical lunar graben. This portion of the interior is thought to have a high proportion of material that was melted by the extreme shock pressures of the impact event that crated the Orientale basin, and the cracks may have formed as the hot material, draped over underlying topography, cooled and shrank. It is hard to picture the effects of an impact so large it would have obliterated the state of Texas, but here you can almost see the molten and shifting terrain settling and cracking.

You can also get a sense of how basaltic lavas, the lower-reflectance deposits seen at bottom right, poured in later, flooding low areas, lapping up against the higher-standing terrain, and leaving kipukas of original basin material exposed in some spots. These lavas are estimated to have erupted on the order of 100 million years after the formation of the Orientale basin, but were not as voluminous as the basalts that bury all but the rims of other lunar multi-ring basins, such as Serenitatis and Imbrium. The WAC image mosaic of the region, seen below, helps put these features into context. Here you can see the Orientale mare deposits lie largely within the innermost ring of the basin, the Inner Rook mountains. (The other rings are named the Outer Rook mountains, also seen below, and the Cordillera mountains, which lie outside of the context image.)

Why did these basalts fill regions largely contained within only the innermost ring of Orientale, whereas other basins were totally flooded? Orientale may have formed in a region of thicker crust, making it harder for basalts to erupt from the mantle to the surface anywhere but the center of the basin, where the crust was thinned the most. The composition of Orientale's basalts is also known to be different from the major nearside maria, with a lower concentration of radioactive heat-producing elements (known as KREEP), so there may have been less heat available to melt the mantle to produce basalts.


GRAIL MoonKAM video stills sequenced into nadir and off-nadir low-orbit HD views of Mare Orientale (2:00). The area of interest is visible between 1:05 and 1:15 [NASA/JPL-Caltech/Sally Ride Science].

This interplay of spectacular, complex features related to basin formation and later volcanic eruptions means Orientale is a high-priority target for exploration. Samples would pin down the exact age of the basin, important for answering questions about chronology across the Solar System, as well as answer a host of other questions about basin formation and evolution. And what a beautiful view you'd have, standing at the base of Orientale's cliffs!