Surveyor Crater: Before and After 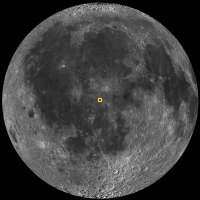 The Lunar Orbiter program, much like LRO, was designed primarily to obtain images to allow scientists and engineers to characterize the lunar surface in the context of finding safe and engaging landing sites for future missions.

A total of 5 Lunar Orbiters (LO) were sent to the Moon, and they collectively photographed most of the lunar surface at 60 to 600 meters resolution, with resolutions as high as 1 meter per pixel for some of the LO-5 photographs.

The spacecraft landed in a small, 200 m crater that was later named Surveyor Crater.

Two and a half years later, on 19 November 1969, Apollo 12 demonstrated the Lunar Module's capability to make a pinpoint landing by setting down on the edge of Surveyor Crater, about 155 m from the deactivated Surveyor 3 spacecraft. Almost 45 years later, LROC imaged the same area of Oceanus Procellarum that LO-3 photographed. The LROC image, however, reveals some new features - the Apollo 12 Lunar Module (LM), Surveyor 3 spacecraft, and astronaut tracks are all visible. Perhaps most evident is that Surveyor Crater and the area around the LM are noticeably brighter than in the LO image.

This increase in reflectivity resulted from effects of the rocket exhaust interacting with the regolith during the descent of the Apollo 12 Lunar Module. Directly beneath and adjacent to the LM the surface appears darker because the exhaust gas disrupted and roughed up the surface. However, a few meters away from the lander and extending outward for several hundred meters, the surface was altered in such a way as to make it more reflective, possibly a result of smoothing.

During the Apollo 12 descent, Pete Conrad flew the spacecraft around the edge of Surveyor Crater in order to get to the safe landing spot he wanted. The crater then likely acted as a mechanism to contain the rocket exhaust, causing the entire crater to experience disturbance and appear more reflective.

I can't see much of a difference in reflectivity in the crater or by the LM site. Is there a way to alter the images so they have equal contrast, so we're comparing apples to apples?

An excellent point! As a matter of fact, we intended to link to the original comparison images utilized in the LROC release, and I suppose we became distracted by our enthusiasm with a host of images in our stores and forgot.

Anyway, the tagline for that original comparison reads, "LROC image M1108432631R (left, incidence angle = 68.8 degrees) and Lunar Orbiter 3 image LO3-154-H2 (right, incidence angle = 67.2 degrees) of Surveyor Crater, the eventual landing site of both Surveyor 3 and Apollo 12. Both images were taken at similar illumination geometries and the NAC image has been stretched to match the saturation seen in the LO-3 image."

And you will find that image at the following link: http://lroc.sese.asu.edu/news/uploads/LROC_LO3_FI_thumb_arrows.png

Thanks for the reminder!

I wasn't have this kinds of detailed and in-depth knowledge about it which you mentioned over here on your post. It's unheard and totally new stuffs for me. manhattan financial advisor

Ok, that's good, the angles of incidence are very close and the sizes have been adjusted. If we could scale the light levels so their histograms would be close, any differences in reflectivity might really stand out.