Second in a series of posts highlighting newly-proposed lunar landing sites selected to address high-priority science goals - from a remarkable landing site study published by the Center for Lunar Science and Exploration (CLSE): 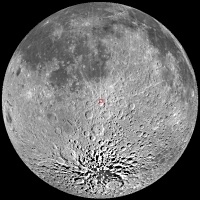 
On February 5 we discussed a proposed landing site in Amundsen crater selected to support "Science Concept 4" as outlined in the commissioned National Research Council (NRC) study The Scientific Context for the Exploration of the Moon (2007).

In this second of a planned series we move to an area north of Tycho visited by Surveyor 7 in 1968. Material from the region was also very likely sampled by Apollo 17 in 1972, as Eugene Cernan and Harrison Schmidt explored Tortilla Flats in Taurus Littrow Valley, 2200 kilometers away.

While working with those same samples at the Johnson Space Center's Lunar Sample Laboratory Facility, Jack Schmidt soon helped estimate the age of samples collected at the base of South Massif directly opposite from Tycho at 109 million years. When the Tycho event happened, only 44 millions years remained before a similar impact ended the long reign of dinosaurs on nearby Earth. When offered as an example of the Moon's young craters the immense differences between terrestrial and lunar timescales and surface preservation rates are made stark. Such differences make it easy to forget that Earth and Moon have essentially shared the same location in the inner Solar System for 4.5 billion years (with Earth being a larger target and deeper gravity well). A study of the impact history and space weathering environment preserved on the Moon is a study of a much better preserved record of Earth's history.

This landing zone was proposed to address "Science Concept 7," a site that first presented to the Lunar and Planetary Science Conference in 2012 (Abstract #1387), from work produced by the Lunar & Planetary Institute Summer Intern Program the previous year. More detail emerged in the final CLSE landing site study of each of the NRC's 2007 lunar science goals, last fall. The LPSC 2012 abstract and contribution to the final CLSE study are credited to director David A. Kring and LPI 2011 interns Sarah Crites, Agata Przepiórka, Stephanie Quintana, Claudia Santiago and Tiziana Trabucchi.

The sites appearing in the new CLSE study might be broadly separated into two sets, ranked lists of many possible landing sites picked to fulfill all or overlapping part of the goals under the Science Concepts or individual targets picked in hopes of addressing all goals within one Science Concept and possibly overlapping with one or more of the other Concepts.

In other words, the ranks of possible landing sites in the new study range from those picked to accomplish much within practical, logistical and budget constraints over the next two decades to a long list of sites that may require 50 to 100 years to directly sample, along with a few lists falling somewhere in between. This might be a reflection of the political changes occurring over the years since the study began, when renewed exploration and establishing an extended human presence on the Moon went from being National Space Policy to falling by the wayside.

The new study is highly useful, regardless. Along with the Lunar Impact Crater Database, an even more detailed picture of the origins, ages and compositions of the Moon's complex features has been coming into focus, reflecting the astounding range of detailed information about the Moon collected in recent years.


Since the goal is to establish definitive baselines, the actual ground truth of the upper few centimeters of the Moon's surface, why land near Tycho, the 86.2 km-wide astrobleme (41.49°S, 348.23°E) that is so much younger than its counterparts from earlier eras that have long faded into the albedo background? As it turns out, it's precisely because of such notably pristine.conditions, a comparatively youthful impact upon a region older than Mare Imbrium, that led Kring and his colleagues to seek this place out - along with proximity with Surveyor 7.

Understanding the dynamics of the upper few centimeters of the Moon's surface, most of which is turned-over, or "gardened" every couple of million years - involves more than dust mitigation or the charging and levitation of sub-micron dust as it interacts with radiation from the Sun and deep space or the Moon's nested crustal magnetic fields. Researcher will need a better understanding of this blasted layer of fine particles on wildly different timescales.


Up, over and just beyond Tycho's 1200 meter high rim, the proposed LZ pictured above sits roughly at 620 meters elevation above the lunar geode (near 41.49°S, 348.233°E), the Moon's mean elevation, just out of sight from the sharp 800 meter drop down the crater wall (check this). The familiar crater's complex ejecta blanket extends 110 km from the central peaks, and its famous rays, visible to the naked eye, extend past 2000 km.


Beyond the debris piled high on the Tycho rim, the area of interest north by northwest of the crater, is characterized by slopes from 4.5 to 6° - safe for manned and unmanned landers. The specific Landing Zone is approximately 20 km from the rim fall off, where ancient pre-impact regolith appears to be exposed in layers visible in LROC NAC photography.

Because Tycho excavated pre-Imbrium nearside Southern Highlands, "any paleoregolith layers in Tycho's walls will also have a pre-Imbrium age," Kring and his colleagues note.

"Tycho's crater walls are the best target for sampling," though the upper reaches of the mountainous rim between the landing zone and the crater wall retain slopes greater than 25° "a navigable route to access layered deposits can probably be found."


"The site provides access to regolith produced from substrates of different compositions (see image above)," from the coherent melt pond of the landing site itself to "rubbly ejecta... in a highlands area far from" the unique Procellarum, Potassium and Rare Earth (PKT, or 'Procellarum KREEP') terrain, covering so much of the nearside's west quarter.

Because the Tortilla Flats formation, sampled by Apollo 17, and nearby Surveyor 7 sampled materials related to the Tycho impact event "we can leverage these previous missions to compare properties of regolith of the same age formed from different types of ejecta."


Establishing the rate and manner space weathering leads to the optical maturing (OMAT) of the Moon's surface will help researchers understand processes ranging from the interaction of reactive dust with crustal magnetism - the age and deposition rates of the Moon's swirl phenomena - the deposition of lunar volatiles and tighter estimates of the age of craters between one and two billion years old, past the time needed for optical maturity to do its work.


Remote sensing maturity maps hint the proposed landing site is characterized "by both very immature and intermediately mature soils," according to Kring and colleagues, "providing an opportunity to see the evolution of space weathering processes."

Proximity with Surveyor 7, about 20 km away, in the opposite direction from Tycho's rim, allows study of a known surface, and for a known amount of time (since 0600 UT, 7 January 1968), a stated goal in the NRC's 2007 commissioned report.

It's hoped the 20 km distance from the proposed landing site will prevent Surveyor 7, as a valuable 'long-duration exposure facility," from being undermined like Surveyor 3, ultimately swept clean by the descent of Apollo 12 only 183 meters away in 1969.Surveyor 7 may provide a "more pristine" baseline for measuring short-term space weathering.

The Tycho North landing site clear of any known crustal magnetism, free of space weathering processes both accelerated and slowed, as they appear to have been at Reiner Gamma, for example. Samples should therefore be "better representative of the lunar highlands."

The rate of solar-wind production of volatiles "can also be nicely calibrated here," Kring and his colleagues have noted, since "the exposure age is known and the orbital relationship between the Moon and the Sun is unlikely to have changed significantly over that period."

Chemical traces of the object that created Tycho Crater may be be found in the melt-rich rocks at the landing site, along with the shattered pieces of more distant and much older events in the 'recently' exposed paleoregolith uplifted in layers at Tycho's rim.