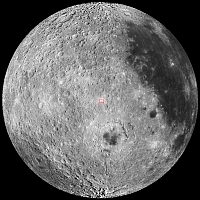 Our impressions (and interpretations) of surface features on planetary bodies are affected by the way they interact with sunlight when we image them.

For instance, the shape of a crater is brought out by shadows in large incidence angles (Sun near the horizon) images.

In today’s Featured Image, we are observing a crater with the Sun nearly directly above the surface. This type of image (small incidence angle) helps scientists understand the physical properties of the surface. Why might the ejecta blanket of the crater be highly reflective? Why is the interior have a much lower reflectance? Two different surface properties could be affecting what we see. First, 'fresh' material should be brighter than surrounding material. And second, the composition of materials affects how they reflect light (see albedo).

In the case of today's Featured Image, the crater looks very young. We have some stratigraphic evidence for this as the crater is sitting on top of a larger flesh unnamed crater's ejecta deposit (see context image below).

Therefore the brightness of the ejecta blanket is likely due to the young nature of the crater! But that doesn't solve the problem of the crater's interior. The interior could have been mantled by a thin veneer of impact melt which then pooled in the center. We know from many examples that impact melt rock reflects less light than its source material.

The impact melt hypothesis is not certain, though a follow up image at a larger incidence angle to help us understand morphology and could certainly help test this hypothesis!

Could it be a collapse pit?