Cinder Cone, Impact Crater, or Something Else? 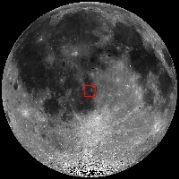 Continuing our discussion of the Lassell Massif region of Mare Nubium (see yesterday's Featured Image post HERE), we migrate to the southern end of the massif proper, where we find a distinctive circular feature. At first glance this appears to be an ancient, degraded impact crater -- and this could very well be the correct explanation. It also, however, bears a morphologic similarity to cinder cones seen elsewhere on the Moon (Lacus Mortis, for example). This degraded circular feature has inner rim slopes of ~5°, outer flank slopes of 4-10°, and a height of ~60m, similar to the dimensional proportions of a cinder cone. Cinder cones are another example of pyroclastic volcanism, when eruptions are energetic enough to loft material above the surface, where it cools and descends to collect in piles on the ground.

To understand the context for this feature, and indeed the Lassill Massif itself, we must first review a brief introduction to geochemical evolution and planetary volcanism in general.

According to current models, when a star forms within an interstellar molecular cloud (together with its orbiting planets), the individual objects within this new solar system have a similar starting composition chemically. This is why CI carbonaceous chondrite meteorites (among the most primitive materials in the solar system) have essentially the same composition as our Sun (minus the hydrogen and helium, of course). When enough internal heat builds up inside a planet, moon, or asteroid to partially melt this material, the result is a magma rich in iron and magnesium, and the rock that forms after cooling is a dark-colored basalt.

Thus basalt is the easiest igneous (from a melt) rock a planetary body can make. We find basalt on Mercury, Venus, Earth, Mars, the asteroid Vesta, and the Earth's Moon, and it is no surprise at all. Basalt is what makes up the dark features on the Moon. Now if basalt is partially melted, an even more geochemically "evolved" magma is produced. The process can continue to result in ever-more silica-rich, iron-poor rock products. Eventually granitic / rhyolitic magmas are produced. This is easy to do on the Earth where plate tectonics provides these mechanisms. Its anomalous on a body like our Moon, where plate tectonics does not take place.

Though surrounded by the basalts of Mare Nubium, infrared data from the Lunar Reconnaissance Orbiter Diviner instrument confirm a silica-rich nature to the Lassell Massif construct. For the reasons outlined above, this is somewhat anomalous to our current understanding for how lunar volcanism works.

The Digital Elevation Model for the Featured Image region provides topography as a color scale where yellow is low elevation and red tones are high elevation. The black arrows highlight what appear to be lobate flow structures that superpose the circular feature. These lobate materials present a silica-rich spectrum, while the underlying half of the circular feature do not. Whatever this landform is -- cinder cone, impact crater, or perhaps simply a geologically insignificant depression coincident with a moderately round lump of debris -- it was deposited before the silica-rich deposits were emplaced on top. Once again we see that our Moon is more complex geologically than previously thought!

The oblique image below provides the type of view that Command Module Pilot Ken Mattingly must have had during his Apollo 16 survey of the area in 1972.

Explore the full NAC frame HERE. Another example of pyroclastic deposits is found in the post "Dark Streaks in Diophantus Crater." As we shall see tomorrow, the Lassell Massif story gets even more complicated and mysterious as evidence for other pyroclastic deposits emerge from our data ... stay tuned!
Posted by Joel Raupe at 7:11 PM