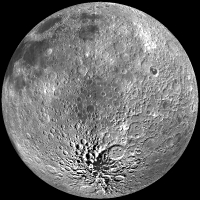 LROC NAC images reveal that while there are many bowl-shaped craters, there are also many craters that are not bowl-shaped or even very circular.

Today's Featured Image is an approximately 1 kilometer in diameter crater (45.661°S, 93.016°E) with a very irregular interior morphology. This crater exhibits a defined rim for all but a small portion of the crater (shown in the opening image). In this region, the crater wall is a jumbled mass of material that looks more similar to wall collapse than crater cavity excavation. The surrounding crater walls are covered with jagged blocks and impact melt veneer, and a 100 m wide melt pond with polygonal fracturing is located on the crater floor.

Irregular crater morphology can be attributed to several factors. The impact process involves vast amounts of kinetic energy that may not be uniformly distributed throughout the target during impact. For example, a non-uniform energy distribution may be the result of an oblique impact, a steeply sloped target surface, or perhaps a low velocity secondary impact. Similarly, target properties, such as re-existing weakness or strength variations in the target rocks, may influence crater shape. Because the impact process is complex, it is often difficult to determine which factors dominate when studying craters with irregular morphologies. However, for today's crater, it is likely that some of the crater morphology irregularity is associated with the target slope; the impact occurred on the outer wall/rim slope of a degraded crater.


Take a look at the full LROC NAC image, HERE, and explore the morphology of the young crater for yourself.