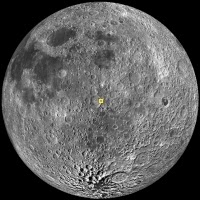 Why do we see such a sharp contrast in reflectance in the above Featured Image between the crater wall on the left and the crater floor on the right? This is the floor and wall of an ~8.5-km diameter, unnamed impact crater within the much larger Humboldt crater on the lunar farside.

The reason for the striking dichotomy in terrain appearance is not a mystery -- it has to do with solar illumination angle.

Our star, the Sun is shining from the west at an elevation above the lunar horizon (~25°) that is close to the slope of the western crater wall. Thus much of the wall on this side is receiving low-angle sunlight and appears relatively dark compared to the crater floor surface, which is more directly illuminated. The floor makes a clean contact with the crater walls, and becomes a zone of deposition for boulders rolling down the slope, including one larger and prominent boulder at the southern end of the frame.

For reasons like this, planetary scientists need to be careful when making interpretations of surface features, and must often use several images collected under a variety of lighting geometries to understand the geomorphology.

The WAC mosaic presents the exotic landscape of Humboldt crater for context. Click HERE to see the full NAC frame.

Other examples of lighting effects can be found at the earlier LROC Featured Image posts, Shadows in Egede A, Boulder or Crater?, and Sunset Boulder.
Posted by Joel Raupe at 7:56 PM