Sometimes you just need to 'vent' 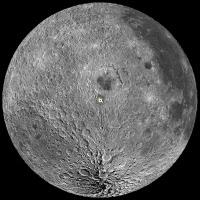 Pyroclastic deposits on the Moon are often identified by a mantled appearance and low reflectance. These deposits are the result of an explosive eruption (or many) that involved a volatile component, likely carbon monoxide. The resulting fine-grained debris, including glass beads like those sampled by Apollo 17, gives the surface a dark, mantled appearance (See WAC image below).

The lack of a discernible crater rim and irregular shape make this depression a suspect (See WAC image below). The walls of the depression are steep-sloped, yet the floor is fairly flat, which is best observed in a color-shaded digital terrain model (DTM). Such reniform depressions are observed in other locations across the Moon, such as Sulpicius Gallus, interpreted to be a pyroclastic source vent.

If the kidney-shaped depression is the source of the low reflectance material, it is likely that material was ejected from the source vent at high velocity, creating an umbrella-shaped plume and depositing the dark, fine-grained material in a ring around the vent.

Pyroclastic deposits are currently of interest to lunar scientists as a possible resource for future missions to the Moon. Such deposits are rich in hydrogen and helium-3, two potential resources for energy production, and iron and titanium, which have engineering applications.

The necessary capabilities for utilizing resources such as these in-situ, or on site, are currently under development. In-situ resource utilization (ISRU) is critical to the future of exploration of areas that would otherwise be beyond our reach, both physically and financially.

Do some investigating of your own with the full NAC, HERE.