A Small Clearing on the hazardous floor of Tycho 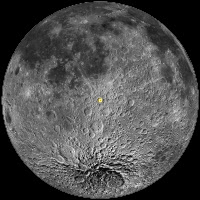 Tycho is one of the most spectacular craters on the Moon. If you've never done so, next time you get access to a pair of binoculars and the Moon is near full, look at the Moon's southern hemisphere: you will see a very bright crater with spectacular rays emanating from it. That's Tycho!

It formed when an asteroid (or comet), going at roughly 20 km/s, hurled into the Moon around 109 million years ago. That age may seem old to you and me, but by lunar standards, that's young.

We think we sampled impact melt that originated from Tycho at the Apollo 17 landing site, but we can also tell it's young just by looking at it: it has a crisp morphology and its rays are seen as high reflectance streaks. With time, exposure to the space environment will fade the rays and erode the crater's sharp features into smooth curves.

During an impact event, almost all of an impactor's kinetic energy gets deposited as internal energy into the target rock. The near-surface layers of the shock melted rock begin cooling relatively quickly, creating a hardened crust lining the crater floor. The subsurface melt, however, can take up to ~500,000 years to cool. This post-impact thermal structure sculpts the floor of many lunar impact craters.

Today's Featured Image is a ledge of a mound on the floor of Tycho crater. The mound is littered with meter-sized boulders, except for this smooth portion on this western ledge. Why is this portion so smooth? The two apparently identical looking 44 meter craters that dot the smooth region probably did not have enough energy to push the boulders aside, and they most likely did not excavate enough material to cover the boulders. The answer may be that still molten rock extruded from beneath the cooled crust, oozing onto the surface, leaving the boulders just out of sight.

Can you find other examples of effusive events and melt squeeze ups in the full resolution NAC? Hint: look along the floor fractures, HERE.