One in a Million Mounds 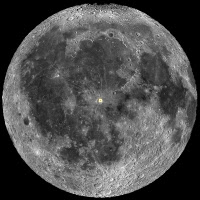 A domical mound protrudes from the floor of Copernicus crater (see 10.332°N, 340.117°E), which is dominated by a solidified sea of impact melt rocks.

These rocks host a variety of positive- and negative-relief features including collapse features, central peaks, and blocky cratered mounds like the one above.

Mounds with craters near their peaks can superficially resemble volcanoes, which often have a summit crater. Previously, several examples of cratered mounds, usually located along the mare-highlands boundaries, were suggested as possible newly discovered volcanoes (Volcanoes in Lacus Mortis, Bull's Eye Crater or Volcanic Vent, Another Small Volcano).

This mound remains unexplored, thus we don't know for sure how it formed. Below is a collection of lunar mounds that are similar in appearance. For each example, try to think about how (or why not) these features might shed light on the formation of the cratered mound in Copernicus.

The summit crater of a volcano is expected to lack a raised rim and is usually less circular than an impact crater. Some small domes at the Compton-Belkovich silicic volcanic complex have craters that are thought to be summit vents (Example 1).


Low basaltic shield volcanoes like those in the Hortensius region also have summit craters (Example 2). The crater on the Copernicus mound lacks a prominent rim crest, but high-resolution NAC-derived topography would better help us differentiate between a degraded impact crater and a volcanic crater in this case.

Larger mounds to the north of Today's Featured Image also exhibit craters near their peaks (Example 4). This type of cratered mound is fairly common on the floor of large impact craters.

3. Blocks as Remnants of Impact Melt that Once Draped the Mound?

Lumpy mounds on the floor of Rutherfurd crater (Example 5) are littered with the broken fragments of impact melt rocks. These rocks formed as sheets of impact melt draped over the crater floor. Over time, this sheet of rock slowly breaks up and dis-aggregates.

A cracked mound on the floor of Anaxagoras crater (Example 6) illustrates what this sheet of melt might look like before dispersion through mass wasting. The boulders on the Copernicus mound could represent degraded bits of draping impact melt rocks; however, there is little evidence for a coherent layer of solidified melt as in the Anaxagoras example.

Squeeze-ups of molten rock are one possible form of pseudo-volcanism that might occur in a molten sea of impact melt (Example 7).

However, squeeze-ups tend to experience tensional stress across their peak (Example 8), but in the Copernicus example, we do not see any evidence of stress fracturing across the mound. Thus, when all the evidence is considered together, the cratered mound in Copernicus is most consistent with a block of impact debris with a small impact crater near its summit -- not volcanic at all!

Explore the entire NAC image HERE, and look for evidence of other explanations for this cratered mound.