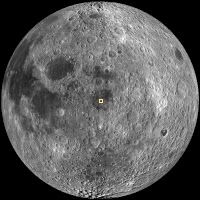 Planetary scientists use the density of craters on impact ejecta as an indicator of age of the impact, based on our understanding of the flux of primary impacts over time. Self-secondaries on crater ejecta are not primary impact craters and inclusion of self-secondary impacts in a measurement will give a higher crater density, and thus result in an older age estimate for that particular surface. The age estimate for the impact crater Giordano Bruno is an example where self-secondaries complicate our understanding of the relationship between surface age and crater density.

The fresh impact crater in today's Featured Image is between two relatively older craters: Haldane (40 km diameter) and Talbot (12.4 km diameter). The crater Talbot has a visible rim, but the ejecta blanket was embayed by mare basalt. Talbot's floor is flooded with mare basalt as well. Haldane is also as old or older than Talbot since sections of Haldane's rim are completely destroyed.