Source Vent for Rima Prinz I 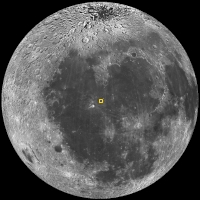 The Rimae Prinz Region displays a diverse array of features including sinuous rilles, massifs, and flooded craters. Today's Featured Image focuses on a Rima Prinz I, a sinuous rille just north of Prinz crater that originates from a cobra head-shaped depression named Vera.

This distinctive depression is probably the source for the mare materials extruded in Rima Prinz I. This particular rille likely formed during the emplacement of the mare that filled the crater Prinz and flowed around the rim of Prinz for approximately 25 km before taking a sharp turn to the north, perhaps occupying an existing topographic low.

The rille then extended for another ~50 km before grading out into Oceanus Procellarum. In Today's Featured Image, it is easy to see Vera's step-like appearance. The higher step represents a an early eruption event that partially filled the vent and froze, creating the flat "ponded" surface. Later another eruption occurred and the center of the original pond collapsed as a new smaller vent opened.

In the WAC context image above, we can see the concentration of sinuous rilles in the Rimae Prinz Region, these features are indicative of volcanic activity in this region. The rilles were formed over several episodes of volcanic activity, as evidenced by their varying states of degradation and stratigraphic relationships within and between the rilles, including cross-cutting relationships. For example, Rima Prinz I likely formed from at least two episodes of volcanic activity, because a small sinuous channel is carved from within the interior of the larger channel. The smaller inner channel extends much farther than the larger outer channel, a phenomenon also seen in Vallis Schröteri. As Rima Prinz I is connected to Vera, Vallis Schröteri's rilles are also connected to a source depression.

This internet site is my breathing in, very great pattern and perfect content. If you're looking for the best Things to do in the world, this list has something for everybody! From adventure to culture, food to history .