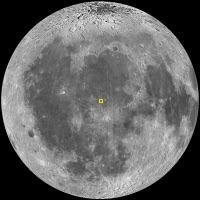 The NASA Lunar Impact Monitoring Program monitors the Moon from a dedicated telescope facility at Marshal Space Flight Center for Meteoroid Impacts. Since 2005 the Marshall group recorded over 300 flashes (assumed to be meteoroid impacts), their brightest recorded flash occurred on 17 March 2013 with coordinates 20.6°N, 336.1°E. Since then LRO passed over the flash site and the NAC imaged the surrounding area; a new 18 meter (59 feet) diameter crater was found by comparing images taken before and after the March date.

This is not the first new impact crater the LROC team has found, nor will it be the last! Hundreds of changes to the surface appear in NAC temporal pairs, the LROC team is systematically searching this growing set of before/after images and results were presented at the American Geophysical Union Fall Meeting last week, and more is coming in the near future.