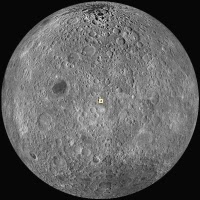 The opening image is of the eastern edge of the floor of the farside crater Buys-Ballot (66.4 km in diameter). The shape of this crater is elongated from the northwest to southeast (see next WAC context image), likely due to a low impact angle. The floor is partially resurfaced by basaltic lava, leaving a relatively flat area around the linearly aligned central peaks.

The topographic ridge from upper-left to lower-right of the opening image is offset along a lobate scarp that extends about ~60 km along the contact of the flat floor and eastern crater wall. The late afternoon illumination from the left side of this image (incidence angle is 82.4°) highlights the fault scarp and the up thrown lava (lower left half of the image). The scarps extend out of the crater in the south, but segments there are not as well developed as those inside the crater and gradually disappear.

The lobate scarp is located in mare basalts and extends up and out of the crater into the surrounding highlands, somewhat similar to the famous Lee Lincoln scarp near the Apollo 17 landing site. Although formed in mare, the fault scarp does not have the distinctive morphology typical of wrinkle ridges that are found exclusively in mare basalts (see Wrinkles in Mare Frigoris, The Ghosts of Mare Fecunditatis & Boulder Clusters on a Ridge Crest).

Lobate scarps are formed by thrust faults caused by global contraction of the Moon as its interior cools. Sometimes these young thrust faults crosscut highland craters like Buys-Ballot crater and Seares crater, resulting in fascinating sharp morphologies on top of the featureless flat basaltic plain.

Explore the low-sun picture of the lobate scarps inside Buys-Ballot crater, HERE.