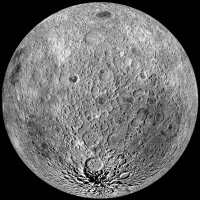 We invite you to take a close look at this sinuous rille in Jules Verne crater on the lunar farside.

Why do we see it approach this portion of an ancient, mare-flooded crater rim and suddenly terminate?

Any flowing river of molten rock (the process responsible for most sinuous rilles) would skirt the base of such a positive-relief structure once encountered ... unless the crater rim formed after the rille. But if the crater is flooded by mare basalts (see context image below) the crater must have formed before the rille, which established itself during mare emplacement.

A clue may be present within the rille itself. Note the sloping wall of debris entering the rille at the point where it encounters the crater wall near the center of the Featured Image. This is accumulated debris, which has been shed from the crater rim. If you look closely at the full NAC frame, HERE, you can also see a subtle break in slope around the perimeter of the crater wall that betrays the presence of a debris apron or pediment.

This eroded material may have buried other portions of rille that might indeed have skirted the original rim, giving the visible portion an appearance of protruding out of the rim at a sharp angle. Can you find any additional clues that would help solve the puzzle?

Other examples of rilles are highlighted in the LROC Featured Image posts "Meanders in Posidonius," "The Old and the Young in Tsiolkovskiy," and "Rimae Prinz Region - Constellation Region of Interest."
Posted by Joel Raupe at 9:00 PM