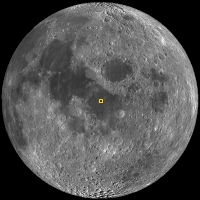 It’s time to inventory the Moon’s “pit craters.” The first, the "Haruyama," or "Marius Hills pit crater" (14.065°N, 303.224°E) is in a sinuous rille immediately west of the famous shield volcano range in Oceanus Procellarum.

It appears the LROC team at Arizona State University uncovered another, over the past year, out on the vast equatorial plains of Mare Fecunditatis (0.92°S, 48.66°E).

This is remarkable for a number of reasons, not least among them the mission’s elapsed time. As of this writing LRO has completed 17,801 orbits around the Moon. Without knowing the exact percentage of the lunar surface yet to be photographed by the LROC Narrow Angle Cameras – it’s remarkable a 110 meter wide target could have been missed until relatively recently.

That is it might seem remarkable, until we consider some basic “beta angles,” so to speak, some basic mission priorities and logistics.

The target is within a single degree south of the equator. Obviously a spacecraft in polar orbit is going to see its orbital pathways and targeting opportunities converge directly over the poles, conversely those same opportunities will be at their greatest distance apart at the equator.

Secondly, this has got to be one of the Moon’s great “Rub’ al khali's,” an empty quarter, which must have seemed nearly void of inviting targets, with very inviting targets nearby, particularly to the west, where the fascinating Messier and Messier A craters reside. The east rim of Messier B is only a little over 20 kilometers directly to the west. The desire, even the need, to slew the spacecraft and camera’s off nadir to examine these and other nearby targets is reason enough for the pit to have been overlooked.

Then there’s the target itself, which brightens considerably between a 30° and 0° angle of incidence. Under the highest sun, near noon, and again, very near the equator, the target looks like what it may in fact be: an unusual but still rather commonplace nearly fresh crater.

It proves, yet again, that there are still great new discoveries yet to be made on the Moon.

Having to guess just what drew their interest, the target seems to have been photographed at high resolution April 28, 2012, in orbit 13087. Amazingly, the pit was nearly missed. You can see the north half of the target at the very top of LROC Observation M190280022L, HERE.

By last fall it seems the pit was directly targeted under three lighting conditions, the first, last September, must have seemed disappointing. With the Sun only five degrees from directly overhead what little topography might be seen on target and in the region may have seemed washed out in shadowless albedo contrasts. If this was a pit crater the “ledge,” if any, was not overshadowing.

Isnt there also a smaller (~20m) pit crater in Mare Smthii? Sure i saw that in a paper somewhere last year.

I am all but certain that there are other mare "pit craters," (Haruyama Class?) like the two, perhaps most spectacular, examples in Tranquilitatis and Ingenii. This one clearly caught the attention of the targeting group among Dr. Robinson's team at ASU. If there's another in that class on the floor of Smythii, I'd love to know the coordinates!

This magnificent mission will continue to rewrite the classification lists for decades to come.

There are the other inter-crater pits, of course, particularly on the northeast quadrant of the floor of Copernicus, and the natural bridge on the splash plain north of King.

Someone's going to have to start coming up with names for these. I've started calling the pit at Marius "Haruyama" for convenience sake, after the Kaguya PI.

The Mare Smythii pit is mentioned on p25 of Robinson et al 2012 'Confirmation of Sublunarean Voids...' as being only 17m diameter (small!).