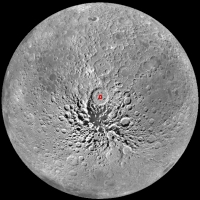 The Schrödinger impact basin is a geologically fascinating location, especially because of the variety of geologic features available for future exploration and it is the second youngest large basin on the Moon (just behind Orientale).

Discussed at length in several other Featured Image posts, blocky material, including boulders greater than 1 meter in diameter, can be used to help unravel geologic stories for an area.

In the case of boulders in Schrödinger, often the boulders originate from regions not easily accessible by robotic equipment or humans. Today's Featured Image highlights a distribution of boulders near the base of a part of the central peak ring (77.196°S, 133.178°E).

Today's boulders are derived from the higher elevations of a massif that is part of the Schrödinger central peak ring. Why is this fact geologically interesting? Because central peak rings form during the impact process; as the target is deformed and displaced during impact, material from depth is pushed toward the surface. Central peaks are usually formed in complex craters with diameters ranging from roughly 15 km to 200 km, but when the impact crater is larger than 200 km, central peak rings begin to form.

So, boulders originating from a central peak or central peak ring sample rocks from far beneath the lunar surface. How far? Scientists are not exactly certain, but there are several hypotheses and models undergoing testing with the help of LROC data.

Can you find a boulder that may be responsible for creating the observed boulder trail in the full LROC NAC image, HERE?