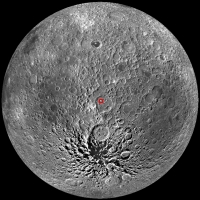 The small crater featured today is a bit atypical. The crater's ejecta blanket has a higher reflectance than its surrounding, its interior is peppered with a number of boulders, and it has a poorly developed rim. Bright ejecta normally implies a fresh crater, but with the poorly developed rim it does not appear to be 'fresh'. So it could be either a secondary crater formed from a nearby cratering event, or it could be a fresh crater with an anomalously degraded morphology.

A better idea of the local geology might help with our interpretation.

The small crater apparently sits on the rim of the larger crater Planck W. (the) ejecta blanket (of an adjacent small crater) is highly reflective - (it's) all you can see of the crater in the WAC context image!

In this case it appears that the crater is young since its ejecta blanket is still around. But then why does the crater not look morphologically fresh? It could be a form of physical mass wasting. Diffusion models of the lunar surface indicate that small craters are quickly degraded in terms of their morphology, but the ejecta blanket is not affected. Resulting craters might look very similar to today's Featured Image.