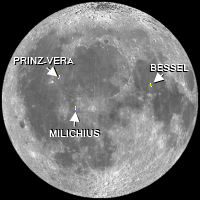 Since the latest release of Lunar Reconnaissance Orbiter Camera (LROC) images on December 15 we've been able to get a better idea of what flight directors were up to last August. As advertised, the record-breaking spacecraft's roughly 50 kilometer high circular polar orbit was briefly lowered to allow a narrow window for very low altitude photography.  The lowest perigee (or perilune) appears to have been engineered into orbits 9838 through 9973, between August 10 and August 21, 2011. At least that's the period where LRO Narrow Angle Camera (NAC) frames from last summer are available at resolutions higher than 40 centimeters per pixel.

The area covered, moving westward with the Moon's easterly rotation under the LRO orbit, begin near the nearside's east limb at the 85th meridian traveling short of the 60th meridian west (near 310° east). That period in LRO's August close-up maneuver featured perilunes as low as 22 kilometers over the nearside equator with apogee back up near the Nominal and Science Mission altitude higher than 40 kilometers while over the Moon's farside. Put another way, the very highest resolution LROC NAC frames were captured last August between Mare Marginis west to Aristarchus and the Marius Hills.

The primary purpose of the low altitude maneuvers last August was to allow a last, very close look at three of the six Apollo landing sites, but LROC's targeting team took advantage of the 11 day window to gather hundreds of observations. In addition, the period allowing for greater than 0.4 meter per pixel NAC resolutions was bracketed by a slow, probably energy conserving re-circularizing of the LRO orbit back to within 50 km. There are far more observations among those images between June 15 and September 14 released in December with resolutions higher than the mission average of half a meter per pixel.

There will undoubtedly be thousands more NAC observations captured through December (scheduled for release in mid-March). Though LRO will be placed at an extended mission altitude of greater than 100 km in January it's likely more than half of the Moon's surface will soon be mapped at high resolution, a very successful legacy indeed.