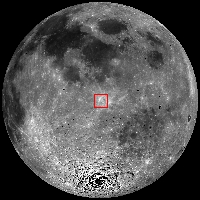 
Stevinus A (31.75°S, 51.55°E) is an 8 km diameter Copernican-aged crater located south of Mare Fecunditatis. Stevinus A is exciting to lunar geologists specializing in the study of impact craters because of its young age, but being young is not the only special thing about this impact crater. Dry debris flows create braided stream-like deposits down the crater walls. A small impact melt pond and subsequent slumped material are observed on the crater floor. Furthermore, taking a look outside the crater rim, the continuous ejecta blanket surrounding the crater is composed of intermingled unconsolidated ejecta (blocky material) and impact melt streamers.

The opening image highlights the very quick nature of impact and subsequent ejecta emplacement. Sometimes, it is difficult to tell when ejecta and impact melt emplacement occurred. For example, was the unconsolidated material deposited first, followed by impact melt? Were melt and unconsolidated ejecta deposited simultaneously? In today's Featured Image, it is difficult to tell, especially because the impact melt streamers are not substantial flows as observed elsewhere on the Moon. However, based on observations of other Copernican-aged impact craters with impact melt, it is probable that the melt occurring in the Stevinus A ejecta blanket was emplaced after the ejecta blanket was emplaced - even if by only a few milliseconds. However, to be certain, scientists would need to complete a rigorous survey of these craters and make careful observations, attempting to discern the stratigraphic relationships between the unconsolidated ejecta and the impact melt.


Can you find additional evidence that supports (or refutes!) the observation that the impact melt was emplaced after the blocky portion of the ejecta blanket in the full LROC NAC image?

Related Posts:
Dry debris or liquid flow?
Brush Strokes of Ejecta
Ejecta Blanket
On the Shore of the Bay of Rainbows
Ray of boulders
Posted by Joel Raupe at 3:41 AM