The Aristarchus plateau is one of the most geologically diverse places on the Moon: a mysterious raised flat plateau, a giant rille carved by enormous outpourings of lava, fields of explosive volcanic ash, and all surrounded by massive flood basalts. A relatively recent asteroid (or comet) slammed into this geologic wonderland, blowing a giant hole in the ground revealing a cross section of over 3000 meters (9800 ft) of geology. No wonder planners for the Apollo missions put this plateau high on its list of targets for human exploration. This amazing image was acquired on 10 November 2011 as LRO passed north-to-south about 70 km east of the crater's center while it was slewed 70° to the west. The spacecraft was only 26 km (16.2 miles) above the surface; about two times lower than normal. For a sense of scale, that altitude is only a little over twice as high as a commercial jets fly above the Earth!

Aristarchus crater is located on the southeast edge of the Aristarchus Plateau. This gaping crater is 40 km wide and 3.5 km deep. The ledges forming the wall of the crater, which look a lot like those of a strip mine, are actually blocks of pre-impact crustal and surficial rocks that slumped into the crater during the late stages of its formation. The impact that formed this crater occurred on a mare-highland boundary and thus excavates a variety of rock types. 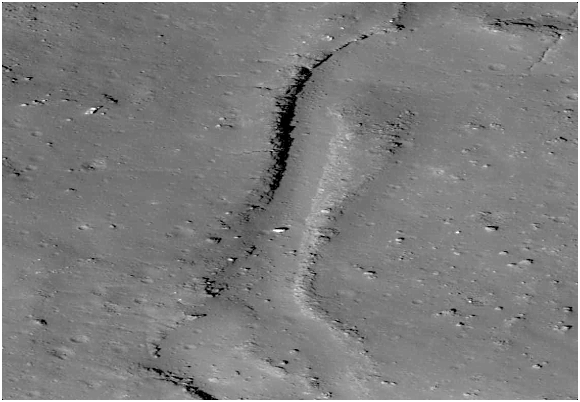 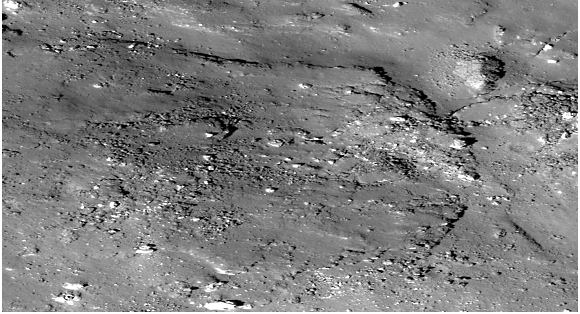 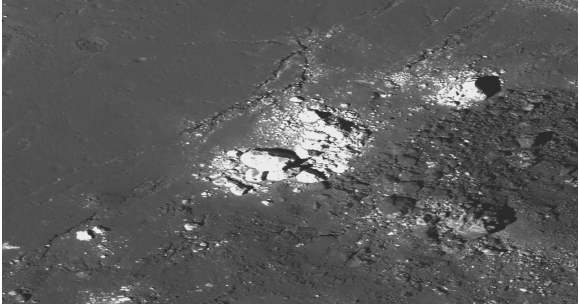 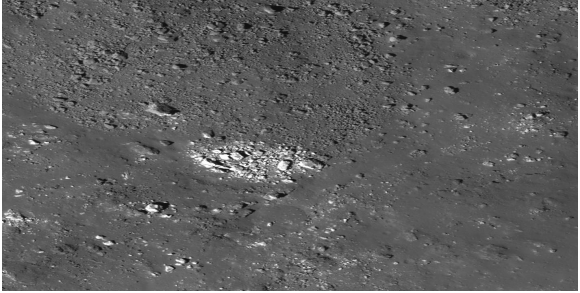 The ledges forming the crater wall, which have a scalloped appearance, are sagging blocks of the pre-impact lunar crust. Bright and dark materials are exposed in patches along the walls. Dark streaks of impact melt and debris cover some of these materials (dark region from top-to-bottom just left of center). Pyroclastic beads (volcanic glasses formed during fire-fountain style eruptions similar to those of Stromboli or the Hawaiian Islands) that blanket the area around the crater have slid down parts of the walls in dark streaks and clumps (visible as small dark streamers across the top of the crater in the center of the panorama). These pyroclastic deposits represent one of the largest, most accessible exploration-enabling resource deposits on the nearside of the Moon. Despite the blanket of dark glassy materials, Aristarchus crater is still one of the most highly reflective areas on the Moon. Much of this high reflectance is due to the excavation of rocks from deep in the crust. These deep rocks may be anorthositic like the highlands, or they may be a more silicic rock like granite (or both). Although granites have been found in Apollo rock samples, the formation of granite on the Moon is not well understood at this time - another reason why we need to get samples from this region!

Look closely at the early afternoon lighting WAC mosaic; you can clearly see that some of the Aristarchus ejecta has high reflectance, and some has low reflectance. This contrast reflects the compositional difference between the target rock. The northwest portion was mostly basalt and ash, while the south-southeast was predominantly crustal rocks (anorthosite and/or granite).

The floor of Aristarchus crater provides explorers a unique opportunity to study a wide variety of lunar rocks and geologic processes, possibly including how lunar granite forms. Diverse materials such as dark, multilayered mare basalts in the walls, bright crustal rocks in the central peak, impact melt, and even regional pyroclastic materials blanketing the crater are brought to the floor and accumulated through mass wasting, creating a bountiful trove of
geologic materials.

Jump to the full resolution west wall panoramic image, and view our flyover video on Youtube.