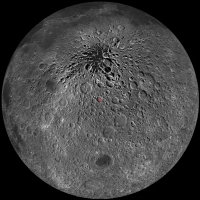 Post-impact modification is frequently observed in LROC NAC images, because post-impact modification begins as soon as the impact crater has formed and ejecta emplaced. Impact crater formation is a violent process, so it should be no surprise that the target rock surrounding the impact site may be fractured and faulted, especially near the crater rim.

Today's Featured Image of the northern rim of an unnamed about 8.5 km diameter crater (64.754°N, 145.546°E) focuses on the faulted nature of the crater rim and evidence for mass wasting.

Some examples of this "slope retreat" of the crater rim are very obvious, whereas others, like today's example, are less so. Today's example shows small-scale slumping of the crater wall as opposed to larger-scale slumping of massive portions of rim material. Perhaps the smaller size of this crater compared to other examples is the reason the slope retreat does not appear well-developed, or maybe the failure of rim faults is less pronounced due to pre-existing target properties (e.g., highly fractured nature of the highlands, impact into floor material of a larger crater, etc.).

Explore this farside simple crater for yourself in the full LROC NAC image, HERE.

Related Posts:
Top of the Landslide
On the Edge
Posidonius Y
Posted by Joel Raupe at 9:27 PM