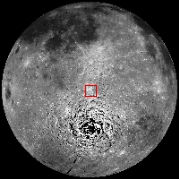 Regolith covers the lunar surface, and the thickness of regolith on the surface is related to the age of the surface. Older surfaces have thicker regolith layers than younger surfaces, and observations of crater morphologies are used to learn about the regolith for a specific area. Bench craters form in layered targets when there are variations in strength between the layers because different strength targets require different amounts of energy during the excavation phase of impact cratering. On the Moon, bench crater formation is usually interpreted to result when a bolide punches through an unconsolidated regolith layer to excavate a more cohesive layer such as mare basalt bedrock. The 75 m diameter bench crater in the opening image (61.504°S, 346.728°E) is a prime example of a bench crater that formed in an impact melt pond that is covered by a thin layer of regolith. However, observations of LROC NAC images show some bench craters like the one above to be self secondary craters, formed during the last stages of the impact process. It may be that the bench crater above was one of the last secondary craters formed during the Rutherfurd impact event, soon after the melt was emplaced, but without further study, we cannot be certain.


The smoothed, softened texture of the pond surface, absence of cracks and fractures in the melt, and presence of superposed impact craters of various sizes and degradational states provide evidence of a layer of regolith in this area. If the 75 m diameter bench crater is not a self secondary crater, the projectile that formed the crater likely excavated roughly 7-8 m into the melt rock. Meter-sized boulders distributed within and around the eastern portion of the bench crater support an impact into a consolidated target and the formation of these boulders during excavation of the crater. Besides confirming the results of experiments conducted in the 1960s with layered targets, today's bench crater might be used to help constrain the depth of the impact melt pond. If there are other craters of similar degradational state in the pond, the morphology of these craters could be studied to help constrain not only the regolith thickness but also perhaps the thickness of the melt pond in this region. Unfortunately, it looks like the ~40 m diameter crater to the right of the bench crater may too degraded or affected by the boulders outcropping toward the upper right of the image. Additionally, finding these craters may prove difficult because the Featured Image may be the location of the only small melt pond with a bench crater in this portion of the Rutherfurd crater wall and any bench craters occurring elsewhere may reflect the strength contrast between the impact melt veneer on Rutherfurd's wall and the crater wall material.