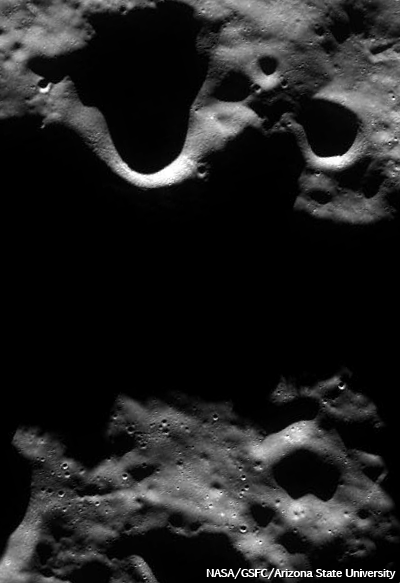 Not all "permanently shadowed regions," or "PDR's," on the Moon are created equal. Not long prior to the LCROSS impact (near the center of the permanently shadowed interior of Cabeus crater, in the LROC Wide Angle Camera (WAC) monochrome mosaic seen above) this nearside crater was discovered to be perhaps the "juiciest" spot on the Moon. At the same time craters further south, closer to the Moon's south pole (and presumably more completely and "permanently shadowed," were dryer. Some of these regions, deep and adjacent to one another showed very different "volatile profiles." And just as Lunar Pioneer seemed to show with far less resolution of data, late in the last century, "volatiles" like water molecules show a profile in wider areas that are not permanently shadowed. Repeated orbital passes by LRO's laser altimeter (LOLA) have now brought this shadowed area to light in detail [NASA/GSFC/Arizona State University].
Goddard Space Flight Center, June 15 - On October 9, 2009, the Lunar Crater Observing and Sensing Satellite (LCROSS) impacted a permanently shadowed region in Cabeus Crater near the Moon's South Pole. Since then, data from LRO and LCROSS have revealed the presence of volatiles, including water, in Cabeus. This LOLA image shows details of the region within Cabeus that cannot be seen in visible imagery (due to the aforementioned permanent shadow). LRO's polar orbit allows for a high density of measurements near the Moon's poles, which in turn gives us high-resolution data of the lunar polar topography.
View LOLA Archives, HERE.
Posted by Joel Raupe at 8:03 PM