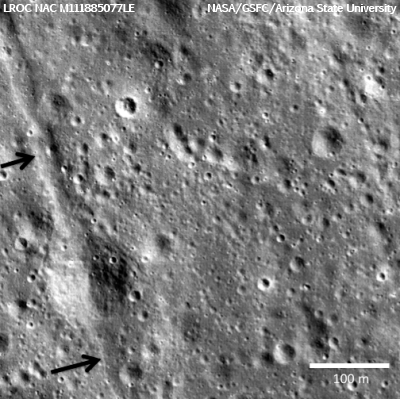 A small graben (28 m in width) in a pyroclastic mantling deposit in the SW portion of Mare Humorum. The image width is 500 m. NAC frame M111885077L obtained at an altitude of 44.7 km, illumination is from the right. [NASA/GSFC/Arizona State University]

Two small black arrows on today's image show the location of a small graben. A degraded impact crater (108 m in diameter) can be seen centered on the graben between the arrows. Graben are extensional tectonic features formed by the downward movement of a crustal block between two normal faults. This small graben is parallel to a much larger graben (Rima Doppelmayer I) which is 1100 m wide and located only 800 m to the west. You can also see other small graben that are parallel to Rima Doppelmayer I. All of these graben may have formed during the episode of regional extension associated with the final filling of Mare Humorum with dense mare basalt deposits. To learn more about lunar graben, visit the Featured Image for December 16, 2009.

Visit this exciting area of Southwest Mare Humorum in greater detail!
Posted by Joel Raupe at 3:47 AM