The complex case at Lassell K 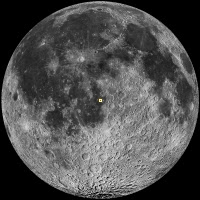 The Lassell Massif is a complex area of rugged terrain located in northeastern Mare Nubium (14.7°S, 351.0°E). This undulating terrain of hills and steep-walled depressions is 45 km across from north to south and 25 km across from east to west.

The southern portion of the massif comprises several prominent elongate depressions (like Lassell K and Lassell G, seen below) that are clustered together.

The clustering and irregular shape of these negative-relief features is reminiscent of volcanic calderas on Earth and other terrestrial planets, including Mars. Calderas generally form through collapse as magma retreats from the vent area. Overlapping collapse features suggest multiple episodes of magma advance and retreat over time. Lassell K and G may be part of a volcanic caldera!

Lassell K and G could, however, instead represent a series of clustered impact craters, which are relatively common on the Moon.

Looking closely at this region, we see other features that are typical of volcanic eruptions including: dark mantling layers interpreted as possible pyroclastics, a subdued or mantled terrain, and even a possible volcanic cone.

Taken together, these features suggest a complex volcanic history for this region. If the Lassell Massif is constructed from a series of volcanic extrusions, it may represent an unusual type of silicic volcanism on the Moon (perhaps similar in composition to rhyolite).

Read more about the Lassell massif and its unusual style of volcanism in a study presented by members of the Lunar Reconnaissance Orbiter Camera team and colleagues to the 44th Lunar and Planetary Science Conference (2013): "The Lassell Massif, Evidence for Complex Volcanism on the Moon," #2504.

The full oblique image (below) along with other images and compositional data sets may reveal more clues to the timing and nature of volcanism in the Lassell region. However, returning rock samples to Earth and exploring the slopes of this structure from the surface may be the only way to confirm its origins.