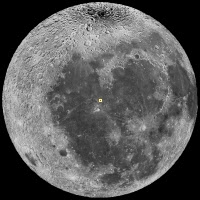 Rima Krieger is a sinuous rille, meaning that its twists and turns resemble meandering rivers on Earth.  Sinuous rilles are thought to have formed as lava became channelized on top of a thick lava flow, as seen at Vallis Schröteri, or as lava flowed across the surface and carved into the substrate.

In the case of Rima Krieger, some of the meanders occur at nearly right angles, suggesting that the flow was controlled to some degree by underlying structure. These sharp turns appear just outside the rim of Krieger. It's possible that the lava flow was diverted by structure resulting from the impact itself.

The rille and impact in Today's Featured Image are only a few of the fascinating formations in this region. Rima Krieger is located in one of the most geologically diverse regions of the Moon. To its west, the Aristarchus Plateau stands above the surrounding mare. On the Aristarchus Plateau, we see mare basalts juxtaposed with anorthositic materials excavated by the Aristarchus impact and a dark mantle of pyroclastics over much of the plateau.

To the east of Rima Krieger, we cross the contact between Oceanus Procellarum and Mare Imbrium (passing many kipukas along the way) and run northeast into the Gruithuisen Domes. To the south, the Rimae Prinze Region displays its many sinuous rilles, flooded craters, and massifs. To explore the entire region in more detail, check it out through the LROC QuickMap, HERE.