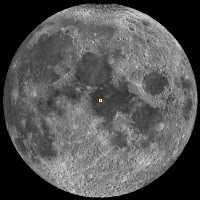 An unusually shaped crater, Arago E is nestled between two wrinkle ridges (see Wide Angle Camera context image below), tectonic features formed by the deformation of the basaltic rocks that make up the lunar maria.

Massive maria lavas placed an extra load on the surface, and these deformations are adjustments of the surface due to the unrelenting force of gravity buckling the rock.

This crater's elongated shape is perhaps due to an oblique impact, which impart excess horizontal momentum into the surface leaving an elongated shape. However, for this to happen it's thought a progenitor projectile had to have been arriving from less than 30° above the horizon.

Volcanic vents can also display elongated shapes but don't exhibit raised rims and usually lack a flat floor from pooled impact melt, and both features are seen in Arago E.

A picture of this crater was taken from orbit during the Apollo 15 mission. (You can see it HERE.) How does the LROC NAC observation, at full resolution HERE, compare?

Related Posts:
A Stark Beauty All Its Own
Constellation Region of Interest at Mare Tranquillitatis
Wrinkle Ridges in Aitken Crater
Wrinkle Ridge vs. Impact Crater
Not Your Average Crater
Posted by Joel Raupe at 4:26 AM