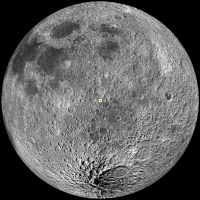 Lunar craters less than between approximately 15-20 km in size are usually bowl-shaped, so the crater above, excavating the floor of Abel C (41.5 km; 36.72°S, 82.5°E) has a somewhat irregular morphology relative to most craters of its size (about 100 meters).

This crater is characterized by its block-strewn, hummocky floor and low-relief rim. The step-like or benched appearance most evident in the northeastern portion of the wall is due to a strength discontinuity. Such discontinuity indicates that the impact penetrated through two materials of different strengths. Lab experiments have shown that the bench crater morphology forms when the surface layer is composed of thin and poorly consolidated regolith and the subsurface is composed of harder, more coherent material.

In some cases, the underlying material is bedrock, evidenced by an abundance of boulders. So, what did the impactor punch through at the surface? Usually regolith is the culprit, but further investigation of the floor of Abel C suggests that it may not be regolith alone.

Abel C is a 36 km diameter crater on the southeastern limb of the Moon, just off the northwest edge of Mare Australe, a large region dominated by volcanic activity. Clementine (1994) color ratio images are extremely useful in identifying nonmare deposits since non basaltic compositions tend to stick out when Clementine images are placed in the proper color space. Three bands (415 nm, 750 nm, and 1000 nm) from the Clementine UVVIS camera were used to create the false-color image below.

The three bands were ratioed to control the colors of the false-color image. The 750/415 ratio controls the red component, which is an indication of low titanium or high glass content as found in mature lunar regolith and to a greater degree pyroclastic deposits. The 750/1000 ratio controls the green component and is an indicator of the amount of iron on the surface. The 415/750 ratio controls the blue component and indicates high titanium or bright slopes and albedos. In the Clementine false-color image, Abel C stands out  from the highlands and more closely resembles the nearby mare. The strong red component, combined with the low-reflectance, mantled floor seen in Abel C is indicative of a pyroclastic deposit.