Debris flow down the wall of Dugan J 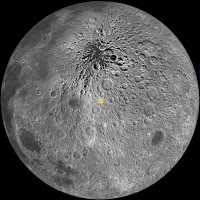 Dugan J is a fresh, simple crater, which is why it appears crisply bowl-shaped and with steeply sloping walls in the LROC NAC oblique image, further below.

In that mosaic, notice the subtle surface expression of a filled crater in the foreground of the oblique image. This nearly 23 km diameter crater is almost unrecognizable because it is filled to the brim with ejecta from nearby impacts, including Dugan J. That's a lot of ejecta!

In the opening image, low-albedo material rests on the southeast wall. Unlike flows of liquid impact melt in craters, the flow observed above is composed of fine-grained, granular debris originating from the crater walls that acted like a fluid as it was pulled downslope by gravity.

Granular debris flows are common in fresh craters, where the walls are steeply sloping, promoting downhill movement of eroded material from high up on the crater walls to the crater floor. Over time, the walls degrade and shallow out. When their slopes reach the angle of repose (for the Moon: near 30° from horizontal), it becomes more difficult to move material downslope. However, if the slopes are disturbed by forces in addition to gravity, such as seismic shaking from a nearby impact, material can still be mobilized.

The granular flow appears to have originated from near the rim of the crater, where low-albedo material can be seen streaking the high-albedo crater wall. There is also some wall material external to the flow in Today's Featured Image that has been degraded and has started to cover part of the floor with rubble. The floor of Dugan J is covered in impact melt and blocks that are being worn into boulders.