Diversity of basaltic volcanism and the Marius Hills 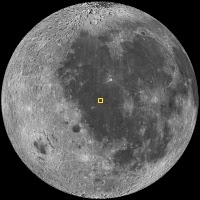 The Marius Hills region (located at 306.2°E 13.0°N) is known for its diverse and complex volcanic features: extensive mare basalt plains, small shield volcanoes, steep-sided cones possibly constructed from cinder or spatter, and sinuous rilles. One of these rilles has a small (approximately 50 m in diameter) pit in its floor, possibly a skylight opening into a lava tube. Today's featured image is a low-sun angle controlled mosaic of part of the Marius Hills region created by combining three LROC NAC left and right image pairs with similar lighting conditions (acquired on adjacent orbits). To create an accurate mosaic, a control network is used to tie the images together and correct for camera pointing and spacecraft position over the lunar surface (refer to the RDR description for more details). Today's featured mosaic illustrates all the major volcanic landforms found in the Marius Hills.

The full mosaic can be downloaded HERE.

Two large sinuous rilles nicknamed "A" (larger, more southern rille in mosaic above) and "B" (smaller, more northern rille in mosaic above) by Greeley (1971) each have a source at a localized volcanic center within the Marius Hills and are embayed (overlapped) by younger mare basalts to the west. Rille "A" contains the Marius Hills skylight feature that was previously discussed in Featured Images Marius Hills Pit and Sublunarean-void!. This pit or skylight is intriguing because it suggests that many other lunar rilles may also have lava tubes or might be formed through lava tube collapse.

The volcanic shields, which are sometimes called domes due to their steep and abrupt margins, are constructed from short and blocky lava flows, but are probably not true volcanic domes. Observations from Clementine and LRO indicate that the blocky lava flows are generally basaltic in composition (e.g., Weitz and Head 1998; Lawrence et al. 2013) even though they appear thicker and shorter than the mare-style volcanism that dominates the lunar nearside. The shorter and less voluminous blocky flows likely result from slower eruption rates and more viscous lava.

The numerous volcanic cones found in the Marius Hills region are atypical for the Moon, though other examples do exist. The steep flank slopes (near 16°) and circular to elongate shapes in plan view (often C-shaped) suggest construction from pyroclastic materials, often called cinder and spatter, like similarly sized and shaped features on Earth. The Marius Hills cones range in size from a few kilometers to 500 meters in diameter. Many of the cones have blocky lava flows that appear to emanate from their central vent, resulting in a C-shaped cone.

The diversity and complex spatial and stratigraphic relationships of rilles, cones, and shields in the Marius Hills region makes it difficult to determine if eruption conditions changed over time. But, in general, the small shield volcanoes, blocky lava flows, and pyroclastic cones were probably formed nearly synchronously. Later, floods of mare lava partially overprinted the region, leaving only the uppermost peaks for us to observe today.

Today's featured image presented only one of the many controlled mosaics collected and produced by the LROC Team! Explore the more than 80 other controlled mosaics of various lunar terrains currently available on the RDR Products website.