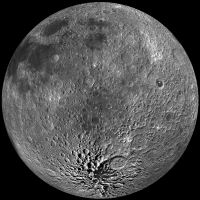 Relatively fresh, undegraded craters are visually stunning. Today's Featured Image of the interior of a 1.7 km diameter crater (38.728°S, 88.697°E) exhibits just how geologically complicated craters can be! The crater rim is well-formed and relatively distinct, with ejected blocks nearby (some blocks might even fall inside the crater).

Portions of the upper crater walls have jagged, fractured material that may serve as the source for some of the mass-wasting observed lower on the crater walls. There is an approximately 350 meter diameter impact melt deposit on the crater floor. This smooth deposit exhibits polygonal cracks, possibly due to contraction as the melt cooled and hardened. Surrounding the impact melt pond are jumbled piles of blocks, some of which show evidence of impact melt veneer while other boulders landed after the impact melt pond cooled (but "how much later?" is a question we cannot answer easily).


Although there are no deep gullies in the upper crater walls, the inter-weaved channels running down the crater walls suggest a complex relationship between impact melt and dry debris flows. The finger-like flow morphology, especially close to the floor melt pond, is similar to impact melt flows elsewhere. However, observations of dry debris flows in other lunar craters are sometimes difficult to distinguish from impact melt. Careful study of stratigraphic relationships is required in cases such as this one to distinguish which material may be melt or dry debris.

Observe the crater wall complexities for yourself in the full LROC NAC image, HERE.