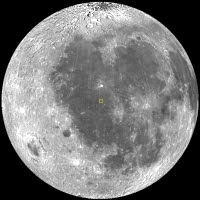 Mare basalt layering is visible in the walls of a number of impact craters such as Caroline Herschel Crater and Pytheas Crater. Layers were seen in the wall of Hadley Rille near the Apollo 15 landing site and Today's Featured Image shows a few layers of mare basalt along the top edge of the wall of Rima Marius.

Look closely at the Featured Image to see the individual layers.

Rima Marius is about 280 km long, sinuously slicing through large extents of mare basalt. The are seen in the Featured Image is centered at 14.986°N, 311.565°E.

Rilles form when large volumes of low viscosity magma erupt and flow turbulently. The erosive force of the turbulent flow carves a channel into the lunar surface and then drains away, leaving behind an empty groove in the Moon. Studying the thickness of mare basalt layers using areas like the Feature Image help scientists model the viscosity and eruption volume of single eruption events.