An Oval Crater on Harvey's Wall 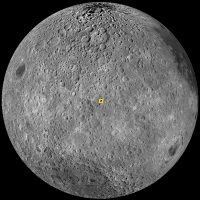 Non-circular (oval or elliptical) impact craters can form when the impacting bolide trajectory to the surface is less than 15° from horizontal or when the bolide impacts a sloped region on the (or some combination of both factors).

This young crater (18.855°N, 213.180°E) formed on the sloping southern wall of Harvey crater, which is very degraded, and may be an example in which target surface slope controlled final crater shape (as opposed to impact angle). The crater is oval-shaped, measuring ~735 m across and ~780 m in the north-south direction.

The southern half of the crater has a well-defined, sharp rim with some concentric fractures (particularly visible on the southwestern rim area) while the northern rim is ill-defined.

The poorly-developed northern rim indicates that the impact trajectory probably traveled from the south/southwest toward the north/northeast. In a lower incidence angle image (Sun approaches "noon" position overhead), the albedo variations emphasize the high-reflectance ejecta blanket (observed in the WAC mosaic below) and observations of the ejecta blanket, including the zone of avoidance, help confirm the bolide trajectory.

LROC NAC images reveal the presence of unexpected ponds of impact melt in small lunar craters. Taking a look at the northern portion of this small crater, there is a smooth deposit with slightly lower reflectance than the surrounding materials. This smooth material is probably a small pond of impact melt, generated during impact. Impact melt is likely distributed elsewhere within the crater as thin veneers, perhaps on the southern wall where there are lower-reflectance smooth streaks, and probably mixed in with the fragmented debris that were not ejected from the crater.

Explore this oval crater for yourself in the full LROC NAC image, HERE.