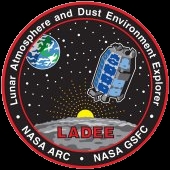 The Lunar Atmosphere and Dust Environment Explorer (LADEE) is due for launch in September 2013 from the Mid-Atlantic Regional Spaceport. LADEE will study the composition and structure of the tenuous lunar atmosphere, including dust that may be lofted up from the surface. It will also undertake a demonstration of a laser-mediated communications system.

In a thick atmosphere like Earth’s, particles are constantly colliding with each other and hence moving in random and frequently-changing directions. The Moon is thought to have a surface boundary exosphere, which is a thin, collision-free atmosphere in which particles follow largely uninterrupted paths.

Indeed, there is a certain imperative to undertake this research now. The increasing interest in the Moon by a number of nations will lead to a steadily increasing frequency of lunar exploration missions that could change the natural composition of the lunar atmosphere, both through the stirring up of surface dust and by the addition of rocket exhaust components.


Read the article at AmericaSpace.com, HERE.