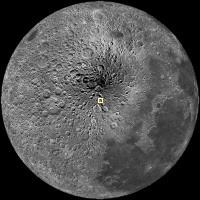 After the unimaginably violent processes of excavation and ejecta emplacement, impact craters gradually change their shapes with time by various processes, such as the isostatic rebound, mass wasting, subsequent impacts, and space weathering.

The lower half of this image (relatively high reflectance) is the crater wall, downslope is to the bottom. The bottom-left dark area is the shadow of southern crater rim. Upper half of the image with a low reflectance surface is the crater rim and the rim slope out of the cavity, mostly covered with impact melt. The low reflectance area at the image center just above the steep wall has multiple horizontal cracks showing where the hardened impact melt has cracked as the steep walls slowly fail and slide into the crater bit-by-bit. These slope failures continuously refresh the crater walls, removing the melt coatings and exposing subsurface materials.

Most of the fresh craters that we observe have suffered these slides, leaving the commonly observed rootless melt flow features on the rim slopes. Just after the impact occurred, much of the crater interior was covered by impact melt, but these rock veneers are quickly removed from steep slopes leaving fresh outcrops of the target (regolith and, in the case of mare, bedrock).