Getting Cracked at Weiner F 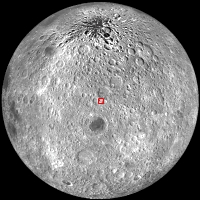 This small impact crater happened to form just a little too close to the widening edge of the Wiener F crater. Fault-slumping of the upper wall of Wiener F has cracked it along a series of linear, subparallel fractures, and the whole area appears to be in the process of down-slope migration. Eventually, if the process were to continue, the disintegration would be complete and the small superposed crater would no longer be recognizable.

The context images above and below show the location of this feature -- nestled within the slumping and fault-bounded eastern crater wall that has produced an irregular protrusion into the surrounding highland terrain. The occurrence of Wiener F within a former, older and larger crater is a coincidence of nature. Who says impacts cannot occur in the same place twice? Here we see three nested craters!

Click HERE to examine the full NAC frame. Other examples of fault-terraced crater walls can be found with Top of the Landslide, Aristarchus Spectacular!, and Post-impact Modification of Klute W.