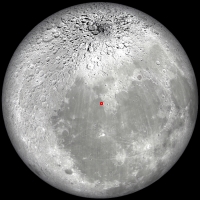 The volcanic dome in the Featured Image (located at 43.673°N, 310.145°E) rises above the mare basalt of Oceanus Procellarum. This dome is another example of silicic volcanism on the Moon, much like the nearby Mairan Domes, the Gruithuisen Domes, and the Lassell Massif.

Each of these features were originally identified as "red-spots," meaning they are spectrally anomalous compared to surrounding mare and highlands material, with strong ultraviolet absorptions that are responsible for their red color.

New data from the Diviner Lunar Radiometer Experiment instrument on the LRO spacecraft confirmed that all four domes (see the WAC context image below) are highly silicic compared to mare and highlands compositions. The Diviner team's work included this fourth dome as part of the Mairan Domes and dubbed it Mairan "northwest." In terms of size and shape, Mairan "northwest" has the most in common with the smallest Mairan dome, Mairan "south." Mairan "northwest" is ~3.2 km in diameter, just slightly smaller than Mairan "south" at ~4.2 km in diameter. However, Mairan "south" is about 400 meters in height (relative to the surrounding mare) while the structure in the Featured Image has a height of only ~180 meters (measurements taken from the WACGLD100 DTM). Regardless of their height relative to the mare, both domes may be greater in size that their surface expressions due to embayment by mare basalt.

Examples of extrusive silicic materials are rare in the collection of Apollo samples and the origins of these materials are not known. However, it is thought that silicic domes like the Mairan domes may be the source locations. Studies of the Compton-Belkovich region have shown that highly silicic lunar rocks are more volumetrically important in the lunar crust than would be implied by their near absence in the Apollo samples. A sample return mission to the region of today's Featured Image would finally answer questions about the origin of these highly silicic rocks - how they were created as part of the Moon's late stage magmatic evolution.