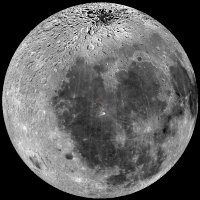 Igneous rocks are common on the Moon, basalt makes up the darker mare, and anorthosite makes up the lighter highlands. Less common are the volcanic structures that might have produced the mare. But in today's Featured Image we might have one such structure!

The area highlighted looks similar to vents (the source point of lava) on terrestrial volcanoes. How strong a case can we make for this being volcanic in origin? Maybe a larger view will help give context.

The small channel in the Featured Image does not have much depth, so it is difficult to make out. But in the high incidence angle (nearly 80°) context mosaic we see that a shallow channel superposes the center of a low relief pancake-like mound. This pancake feature is very similar to shallow shield volcanoes on Earth. These types of volcanoes have very low slopes and additionally, Aristarchus Plateau is just to the south with a number of volcanic features (rilles, flat floored craters, and massifs). Taken together these observations present a strong case that the smooth area in today's Featured Image is the vent for a shield volcano!

Explore more of the area in the full LROC NAC, HERE.