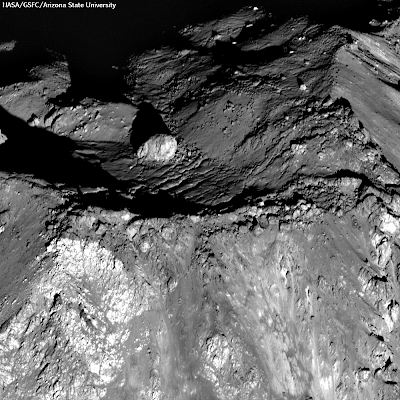 Oblique view of summit area of the central peak of Tycho. The boulder resting inside a summit notch is 120 meters wide, and the image area is about 1200 meters across. LROC Narrow Angle Camera (NAC) observation M162350671L & R, LRO orbit 9059, June 10, 2011. Zoom in on the fill-sized NAC mosaic HERE [NASA/GSFC/Arizona State University].

On June 10, 2011 the LRO spacecraft slewed 65° westward, allowing the LROC Narrow Angle Cameras to capture this dramatic sunrise view of Tycho. A very popular target with amateur astronomers, Tycho is located at 43.37°S, 348.68°E, and is ~82 km (51 miles) in diameter.

The summit of the central peak is 2 km (6562 ft) above the crater floor, and the crater floor is about 4700 m (15,420 ft) below the rim. Many "clasts" ranging in size from 10 meters to 100s of meters are exposed in the central peak slopes. Were these distinctive outcrops formed as a result of crushing and deformation of the target rock as the peak grew? Or do they represent preexisting rock layers that were brought intact to the surface? Imagine future geologists carefully making their way across these steep slopes, sampling a diversity of rocks brought up from depth. 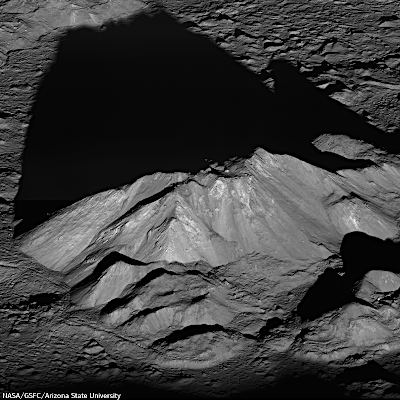 Narrow Angle Camera (NAC) oblique view of Tycho crater, today's Featured Image highlights the summit area of this spectacular image. The central peak complex is about 15 km wide southeast to northwest (left to right in this view). View the "small" full-sized contextual image HERE[NASA/GSFC/Arizona State University].
Tycho's features are so steep and sharp because the crater is young by lunar standards, only about 110 million years old. Over time, micrometeorites, and not so micro meteorites, will grind and erode these steep slopes into smooth mountains. For a preview of what Tycho's central peak may look like in a few billion years, visit Bhabha crater. 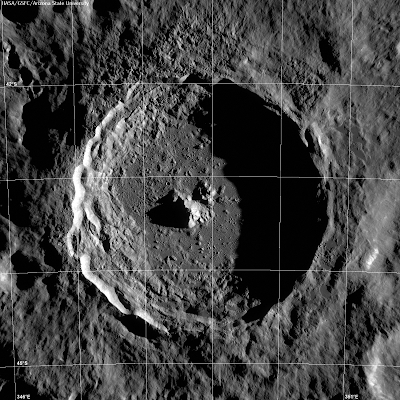 Note the fractured impact melt deposit that surrounds the boulder. And the smooth area on top of the boulder, is that also frozen impact melt? These LROC images clearly show that the central peak formed very quickly; the peak was there when impact melt that was thrown straight up during the impact came back down. Amazing! Instant mountains! Or did the melt get there by a different mechanism? The fractures probably formed over time as the steep walls of the central peak slowly eroded and slipped downhill. Eventually the peak will erode back such that the big boulder will meet its demise as it slides 2000 meters to the crater floor. 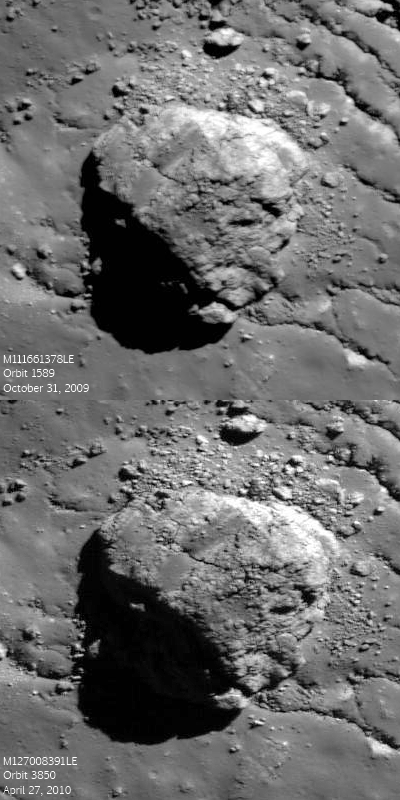 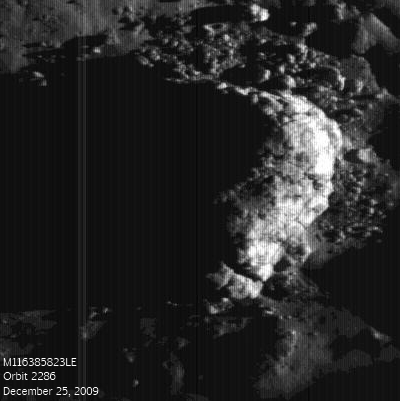 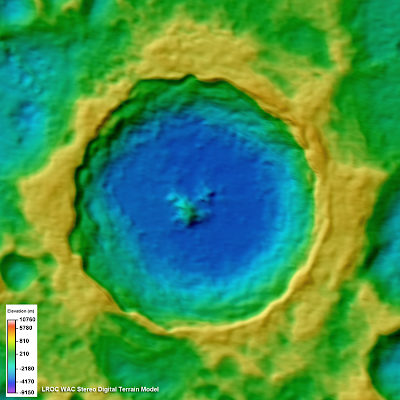 From almost an entirely different angle and illumination, Japan's lunar orbiter Kaguya (SELENE-1) released a Terrain Camera image of Tycho's interior in 2009. Once again, the boulder, situated on a tiny melt plain near the very highest point of Tycho's central peak, is seen. Another large "melt plain" can also be seen at a lower elevation, above left center, a high valley between summits [JAXA/SELENE].
Posted by Joel Raupe at 10:25 AM