[Ed. Note: The following story "bleeds" irony for me, personally, the following local story coming out the week of the 135th and final Space Shuttle mission. First, because I now live only eight miles, and on the same shoreline, as Bath (North Carolina's colonial capital city), and also because the Young & Duke expedition to Descartes in April 1972 is high on my list of all-time favorite missions. I doubt I would have notified NASA of the miraculous artifact. Having endured more than seven tropical storms in the same area as the find, I also have to wonder whether other similar materials might be found at the water's edge, in and around the Albemarle Penisula.
Second, John Young was in command of the first Space Shuttle flight, nine years after becoming the ninth man to walk on the Moon in 1981. - JCR.] 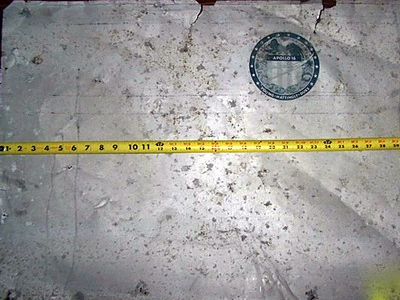 Still near-miraculously embossed with mission shield, this battered piece of the Saturn V that launched Apollo 16 to the Moon in April 1972, turned up on inland shore of North Carolina following Tropical Storm Ernesto in 2002 [NBC17/Durham].
Penn Holderness
NBC17 (Durham)

For Shannon Schanze, it started when she was a kid, watching the space race and the Apollo missions in the '60s. For millions of Americans, that's how it started.
Then there's Shannon's 16-year-old son, Kevin. His love affair of space exploration started when it washed up down the street from his beach house.
It was a one-in-a-million discovery. When he was 11, Kevin was riding on a golf cart around his family's beach home neighborhood in Bath, N.C. It was 2006 and Hurricane Ernesto had flooded parts of the Pamlico sound, so there was debris all over the place.
"My buddy and I saw this metal sheet on the ground, and we thought it was a stop sign or something," Kevin recalls. "I turned it over and it was a really old piece of metal, and there was a little stamp on it. I looked closer and saw that it said "Apollo 16.'"
"I heard everyone screaming come outside," Shannon recalled. "We were just stunned. It was the coolest thing that could ever happen to an 11-year-old."
After a few painstaking years trying to confirm the authenticity of their find, the Schanzes received a letter from NASA telling them the good news: Kevin had indeed found a piece of Apollo 16.
Follow the Story, HERE.